Concussions & Car Accidents: What You Need to Know 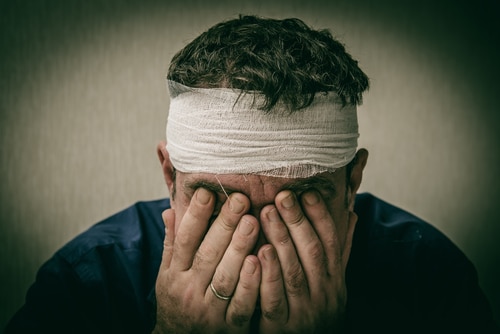 The CDC notes that around 1.7 million people suffer a concussion every year. With car accidents causing about 17% of traumatic brain injuries (TBIs), this means that each year, 289,000 concussions can be attributed to car accidents.

Some of these concussions may be mild and won’t require medical treatment, but others can have permanent, life-changing effects.

Below, we discuss some key statistics surrounding concussions in car accidents and the health risks of failing to seek immediate help for a concussion after a crash.

What Is a Concussion?

Though “concussion” tends to be used as a blanket term, there are several different types of concussions – categorized by the symptoms they cause. Many of the concussions discussed below can occur after a car accident.

A concussion occurs when a blow to the head causes your brain to collide with the inside of your skull. A mild blow may result in mild swelling that resolves itself quickly; a hard blow can cause hemorrhaging (internal bleeding) or even permanent brain damage.

Concussions aren’t only a risk in serious car accidents – even a fender-bender has the potential to cause a concussion. Depending on the speed you’re traveling and the angle of impact, you could hit your head on the steering wheel, the window, the windshield, or even the back of your seat.

What’s more, if you’re in a collision where your car’s airbag deploys, the force of this impact can also cause a concussion. Most airbags inflate at speeds of between 100 and 220 miles per hour. A strike to the head by a high-speed airbag just milliseconds after a crash can send your brain careening from one side of your skull to the other.

The Dangers of a Concussion

What makes TBIs so dangerous is the degree to which even serious brain injuries can go undetected. There are several common reasons for this:

Many doctors now recommend undergoing an MRI exam instead of a CT if there’s any chance you have a brain injury.

If a concussion goes undiagnosed and untreated, it can have serious consequences for the patient:

After a concussion, it’s important to rest your brain and carefully return to your regular activities. Suffering another blow to the head while recovering from a concussion can cause permanent damage.

Types of Concussions You Have After a Car Accident

Some types of concussions present more physical symptoms than mental ones. These concussions are often called “somatic” concussions. Some physical or somatic concussions can cause problems with your vision and balance.

You also may struggle with tasks like reading long paragraphs, staring at a cell phone or computer screen, or standing in one place without swaying from side to side. You might also experience more migraines or chronic neck pain as a result of the injury to your brain.

Cognitive concussions can affect your thinking and ability to process data.

You may have amnesia, experience difficulty forming new memories, or find it tough to concentrate on a task, multitask, or remember how to do certain things. Sometimes, those with cognitive concussions may find themselves getting tired more quickly at the end of the day.

These concussions can impact your emotional state, increasing your anxiety and making it tougher to turn off intrusive thoughts.

Doctors believe that emotional concussions occur when there is any injury or damage to the parts of the brain that regulate emotion.

Even if you don’t notice any physical or cognitive effects from a blow to the head, if you find that your anxiety has grown worse after your accident or you’re having more trouble keeping your emotions in check, you may be suffering from an emotional concussion.

For years, doctors warned caregivers not to allow someone who had just sustained a blow to the head to fall asleep – it was believed that doing so could cause the brain injury to become worse. But in recent years, this guidance has been updated.

For some, the sleepiness that can set in after a brain injury never goes away. You may find yourself more easily fatigued than before or even fall asleep in inappropriate settings. In other cases, your sleep disorder could take the form of insomnia or early waking. Any sleep disruption after a TBI should be evaluated by your physician.

Symptoms of a Concussion After a Car Accident

Every brain injury is different – some people will experience no symptoms or attribute the mild symptoms they’re experiencing to something other than a concussion. Others may have more serious symptoms.

Regardless, if you find yourself or a loved one suffering any of the below symptoms after a car accident, it’s important to give your doctor a call.

And if you experience any of the below symptoms, head to the emergency room immediately. These symptoms can be a sign of a brain hemorrhage or another serious injury that needs immediate medical attention.

The more quickly you seek treatment after a concussion, the more treatment options will be available, and the greater your chances of a full recovery.

An untreated concussion can carry a number of risks, including the risk of developing early-onset dementia. If your brain injury is severe enough to cause bleeding inside your skull, the pressure can result in unconsciousness, coma, or even death.

Some of the potential complications that can result from an untreated concussion include:

These physical symptoms don’t include the financial, emotional, and relationship aftereffects of your injury.

Cognitive or concentration issues may leave you unable to perform the job you had before your injury. You could also find yourself too fatigued to hold down full-time employment. Any changes in personality, including the increase in aggressive behaviors that can be common after a concussion, can make it tough to maintain your relationships with friends or your spouse.

The more concussions one has over their lifetime, especially multiple concussions within a short period of time, the more likely this person is to suffer serious and lasting effects from TBI. Because a brain injury poses so many unknown risks, early medical intervention is crucial.

Injured in a Crash? Breit Biniazan Can Help

If you or a loved one has recently sustained a concussion in a car crash, it’s important to focus your efforts on healing. The last thing you want to worry about is arguing with insurance representatives or lawyers.

The personal injury attorneys at Breit Biniazan have decades of experience helping car accident victims get the compensation they deserve, and we can help you too. Let us handle your case while you focus on what matters most.